I was born in 1966 in the east end of London to the sound of Bow Bells (3am) which actually makes me a proper cockney. My parents moved to Frodsham when I was three months old as my father had taken a job with ICI. I think Frodsham was a great place to bring up children with the hill, marshes and Weaver valley and generally got up to great mischief.

My latter years in Frodsham were not so happy as my parents divorced in 1980. My mother still lives in Frodsham and my father about eight miles away with his second wife. From Frodsham I went to Birmingham, Ipswich, London, Nigeria and latterly Stockport.

The picture is of me at twenty six after three months in Chile with some volcanic mud on me as a “beauty aid”! I can’t say it made much difference but dumping the beard was a relief. 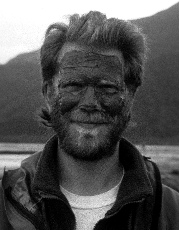