Ah the legend that is the FM2. I bought this for my Raleigh expedition to Chile at the beginning of 1992. I bought it in 1991 and took it to Norway for a trial run. No “modes”, no priorities, no program modes - just a mechanical shutter and aperture that the photographer has to choose between. Even better the camera works in all settings without the battery - even the unprecedented 1/4000 of a second shutter speed. My particular version was the FM2n which had the aluminium shutter blades rather than the original titanium.

When I took it to Chile I was forever grateful for the toughness. At one point I was dragged off the back of a horse and landed on top of it. The zoom ring of the lens got badly damaged and made some grating noises when I used it but the camera carried on taking pictures - see above.

Having an FM2 was fortuitous as three years in Nigeria turned out to be the FM2s forte. A place where batteries would be difficult to get and slide film more so. It survived all this despite some twonk treading on it and badly damaging the top plate and pushing the shutter speed dial into the top. So, for more than a year it worked in this damaged state. 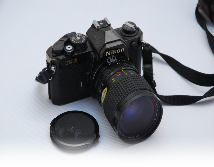