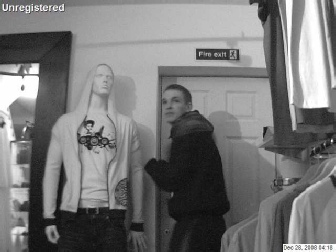 On the morning of 28th December 2008 this guy decided that he was going to rob Blessings shop. A few days prior to that somebody had knocked the alarms external box off the wall.

Little surprise, but we anticipated another attack, so somebody had been sleeping at the shop every night. So, despite smashing a hole through the roof, he was disturbed by Malachi and spent about 88 seconds in the shop and didn’t get a thing.

My CCTV system worked and recorded pretty much the whole incident albeit some was recorded in the mirror. The CCTV system is a series of webcams and some CCTV software called Active Webcam which is excellent. You’ll see that it is unregistered at the moment. With a struggling economy and Blessings shop in its infancy buying  it is difficult.

All the damage has been fixed now but what a pain it’s been. I slept at the shop about eight nights in a row but he didn’t oblige with a return vist and the police never caught him.